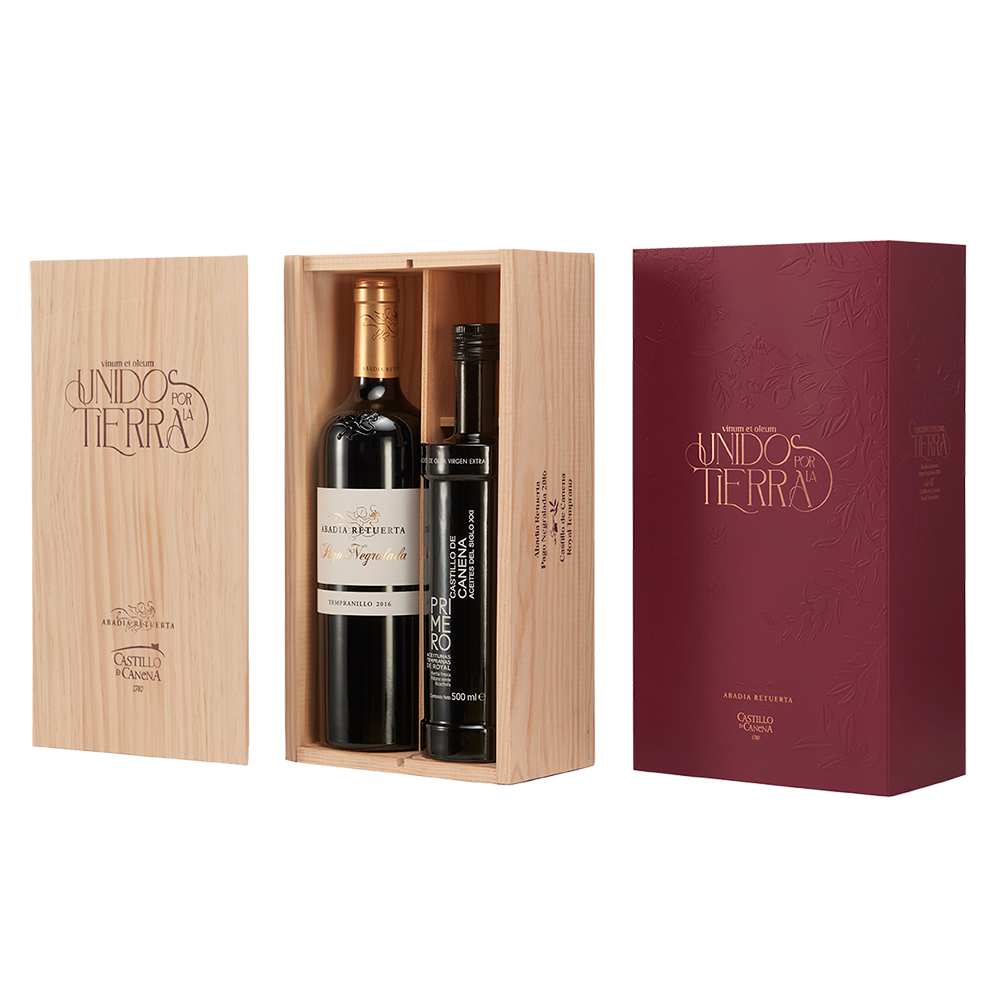 Unidos por la Tierra is the name of a unique joint project, bringing together Abadía Retuerta and Castillo de Canena. This collaboration began in 2017, with the symbolic exchange of two of their most precious assets: their vines and olive trees.

Their union embodies each company’s profound respect for their legacy. This has been reflected in the design of a unique case, which features an exceptional wine from the heart of the Ribera del Duero, alongside a fragrant extra virgin olive oil, made from Royal olives.

Nobility, class and character define the Pago Negralada 2016, a wine made exclusively from Tempranillo grapes. The vines have been planted in soils with deep gravel and surface sand. It has a very attractive nose, with aromas of black fruits, plums and wild blackberries, which then blend with spiced notes of fine wood and smoke, and a creamy hint of cocoa. On the palate, it has fruit-laden and silky tannins, with an elegant velvety texture.

The vineyard’s cycle began later than usual. April and May were cold months, but the rainy spring season meant that an abundant harvest was due. The vineyard, ever a great “survivor”, knew that it would have to make the most of this excess water. The summer, on the other hand, was extremely hot and very long, with high temperatures well into September. This helped regain some of the time lost earlier in the vintage, and with great efficiency, since it had not been a dry year at all.

Aromatic, fruity and unique is the best way to describe Royal Temprano. An extra virgin olive oil made with olives from the Pago del Riachuelo (Loma Larga region), grown in clay-heavy, alkaline soil. It is a bright, leaf-like green in colour. Its nose is fruity and somewhat intense, reminiscent of green grass and fresh vegetables, with notes of green fruit peel. On the palate, there are tones of fresh artichoke, freshly cut grass, other aromatic plants, walnut shells and green banana skin. It has a slight bitterness and some heat, but well-balanced and harmonious. It has a long, menthol-like aftertaste, with certain astringency, similar to artichokes.

The year has been defined by harsh cold snaps in the winter, a rainy spring, and a dry, hot summer/early autumn. The harvest was not abundant, due to a greatly varied fruit set. The olives wee medium-sized and healthy. They were well-hydrated thanks to all the watering, and with a good flesh/stone ratio.