A unique destination at the heart of history and nature

Abadía Retuerta is the custodian of this historic place where land and vine meet. It is an ecosystem of experiences, each of which contains a story that deserves to be told, lived and shared.

Guardians of a Legacy

Nature and history have given us a great legacy, and we must look after it, in a responsible and sustainable way, so that it can be passed on to future generations in even better conditions. In turn, we take care of nature by treating it with all the love and passion for what we do.

A Universe of experiences

This project’s origins are in wine, but it has become so much more, driven by a passion to create unique and memorable experiences. It has a rich history that deserves to be told.

Setting the benchmark in wine and hospitality

A whole universe of experiences around wine, history, art, well-being and gastronomy. 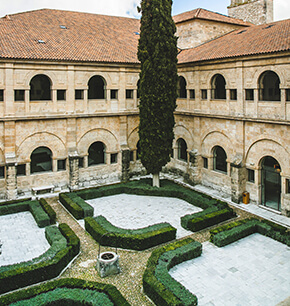 Fusing past and present, for the future. Abadía Retuerta was born in the 12th century, and it is here to stay. We are in no rush: we want the brand to live on, to endure over time. We treat the legacy with respect, dedication and a will for improvement, all of which helps us to be better, every single day.

Surprising our guests is of the utmost importance to us. We aspire to be part of your memories, to shape experiences that bring joy, nostalgia, tranquillity… truly priceless emotions.

We are a brand that shares everything: our historical legacy, our location and our very best grapes. We go above and beyond, so that guests can enjoy and feel part of it all.

The Abbey of Santa María de Retuerta was founded in the 12th century, near the banks of the River Duero. It has watched the centuries go by at the Retuerta estate, and it is one of the most important works of Romanesque architecture in the province of Valladolid. The Abbey was founded in 1146 by Sancho Ansúrez, its first abbot and also descendant of Conde Don Pedro Ansúrez, founder of the town of Valladolid.

The Premonstratensian Order (within which Sancho Ansúrez was ordained as a canon) was the first to occupy Retuerta, and the abbey was established as the order’s headquarters in Spain.

From its very origins, the Abbey was greatly supported by the monarchy, pontiffs and other individuals, and it was here where the General Chapters of the order would meet. Furthermore, from the 17th century it became the order’s General Novitiate in Spain.

The various surviving documents describe the lands around the abbey as an ancient estate with a long tradition of grape-growing. All of this reinforces the area’s great tourist potential in the way it combines the cultural interest of the historical buildings with all the appeal of quality wines.

The sale of church lands by Mendizábal in 1835 led to the monks being expelled from the monastery. It was taken over by the State, which transferred it to various companies and individuals until it became the property of the Novartis Group in 1988. The group successfully resumed the site’s age-old wine-making tradition, through Bodega Abadía Retuerta and, today, Abadía Retuerta LeDomaine.

The site consists of very different architectural styles, both late Romanesque and Gothic, with elements from the 16th, 17th and 18th centuries. Where our heritage estate has been saved, following the work of ecclesiastical initiatives and the administration (such as the Monastery of Retuerta), it has been thanks to the initiative and investment of private businesses: they have truly valued our historical heritage, rescuing our monument from the destruction suffered by so many others.

Its sculptures and paintings have not been lost, and can today be admired in other locations. The façade shows an extension of the south loggia of the cloister, the hostelry. Above, the belfry (1655-56) stands next to the chancel of the church.

The church itself, as a bell-gable, has maintained its irregular-shaped layout. The Romanesque-style chancel stands out from the parts added on later, in the northern Gothic-style section. The cloister, the chapter house and the refectory are also worthy of note.

The cloister is located on the south side of the church, and it leads to rooms that include the refectory, which is situated parallel to the cloister rather than perpendicular to it, as in Cistercian monasteries.

It is surrounded by common rooms:

The monks’ cellarIn a semi-underground area covered by a false vault.
The refectoryParallel to and occupying the entire length of the gallery of the cloister. A painting of The Last Supper presides over the room, which today is home to the Michelin-starred restaurant Refectorio.
The chapter roomthis room can be seen particularly from the cloister, and is one of the oldest rooms in the monastery. The perimeter is covered with a stone bench, where the monks of the congregation would sit to listen to the reading of the chapter.
The sacristyThis was also modified around the mid-17th century.
The church Begun in the second half of the 12th century — it remains incomplete..
The hostelryAs an extension of the southern end, today it stands as the façade, and was built in the late 18th century. It is connected to the cloister by a monumental staircase with three flights.